skip to main | skip to sidebar

It's been a few years here, and though it tried not to, this little space began to feel a little tired, its wrinkles started to set in. And since we (read: I) are a big proponent of change around here, I thought a complete overhaul would only be appropriate.

It's still unfinished; there's a temporary header, and a whole lot of kinks to work out with formatting, but I figured, as long as I'm posting, you may as well be reading.

The blog and I can now be found, disguised entirely under a new name and look, here. You'll recognize us, though. We're still, in spirit anyway, the same old blog.
Posted by KenziW at 10:17 AM No comments:

I am having a month. Is that an expression? It’s like, oh, I am having a day, one of those days. Except for it’s a month.

Here’s a good example: this morning I walked outside, and my car was gone. Just not there, at all. And then I realized, after many moments of reflection, that I had almost certainly parked directly in front of someone else's driveway. Smack in the middle, blocking any hope of them leaving this morning, unless their car was actually a plane.

I would have towed my car too.

And that's what I feel like these days; to be honest I wasn’t even surprised that I had done that. I’m having a month, my brain is having difficulty perceiving driveways, and I’m going around parking right in front of them, without even asking.

The details of the month are better left glazed over, like most root vegetables, and in fact, I would like to pretend - at least here, in this little space - that I went on a lovely little vacation. These days I’ve been enamored with the idea of Northern California, so let’s settle on that, shall we?

I had a splendid time, beautiful weather, many, many hikes and too many avocados to count. But now I’m back, and am faced with not only the reality of my month (as we shall refer to it), but also the reality that there are many things we still have not covered on this little site. Beets, for instance. How have we not gone over beets? They are a lovely root, beets, and I (surprise surprise) have a lot to say about them and their beety ways.

As soon as I retrieve my car from the impound lot, I will have my camera, and will make photographing beets my first order of business. I already have the beets. Soon, you will too.
Posted by KenziW at 2:35 PM 1 comment:

So, meatballs. There is really no known segue for them, and I have tried to think of one, believe me. My best attempts were a clever introduction involving recollections of Lady and the Tramp, or somehow working with cloudy with a chance of. Having failed with the segue business and with no other graceful way to launch into this:

Well, chicken meatballs, if that makes it any more interesting. 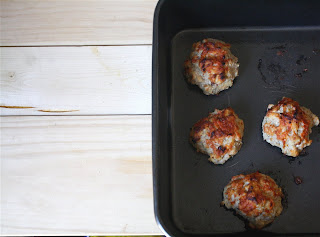 There’s nothing terribly romantic about ground meat. We still eat it, quite a bit: burgers, meatloaf, pate, yet meatballs often come up last in that race. Or at least are never talked about in any real, laudatory way. They are the creamed spinach of ground meats: traditional, old even, liked by everyone - but no one wants to really admit it. They’re silent members of the recipe box, tucked away as some kind of 1950s peasant food.

But I will say, we all can’t roast whole chickens every night, or stir risottos, and if you’ve got a box of pasta and the ingredients lying around (which you probably do), this won’t even seem like a second-best dinner once you’re finished.

I left out the pancetta in this recipe, simply because I didn’t have it. Do not do as I did. These were good, but would infinitely benefit from some salty fat, as most things do. We ate these with just some roasted vegetables and a salad, but they would be great with pasta; you could do as lady and the tramp do, with a rogue version of spaghetti and meatballs.

The original recipe called for three ounces of pancetta, chopped, which you render with the onion and garlic in the first step. I would strongly advise (nudge, urge) you to do that.

Preheat oven to 400°F with a rack in the upper third of the oven. Soak bread in milk in a small bowl until softened, about four minutes.
Cook onion, and garlic in one tablespoon of oil with 1/2 teaspoon each of salt and pepper in a large skillet over medium heat until onion is softened, about 6 minutes. Set aside to cool slightly.

Stir together remaining tablespoons of tomato paste and oil and brush over meatballs then bake in upper third of oven until meatballs are just cooked through, 20 to 25 minutes.
Posted by KenziW at 10:29 AM 1 comment:

Get in the kitchen already

I’ve been thinking about the art of repetition lately, of routine, about how it is less than an art sometimes.

Or, about how if it was an art, it would be akin to medieval madonna and childs, the ones that dominated thirteenth century Christian art with reds, and yellows, and the hard lines like Modigliani’s, but less inspiring and about 800 years older. And it would be the Madonna by the guy who was only copying the important guy who painted it first. 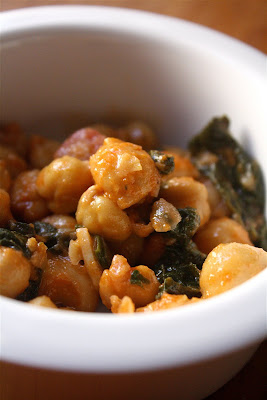 Every morning, I shuffle to the coffee machine and fill it, my eyelids still half-mast and my hair settling into its three new cowlicks. (Now, this is an art. The cowlicks and the blind coffee-making both.) I let Luke out, feed him, sit down at my computer: email, times, orangette, smitten kitchen, the wednesday chef, maybe npr, maybe eater.

Lately, this routine has grown to include peanut butter sandwiches and other simple (read: boring) foods. Eaten invariably between noon and one, with water from the mason jar with the star on it, the sandwiches are the very definition of routine: bland, boring, same. 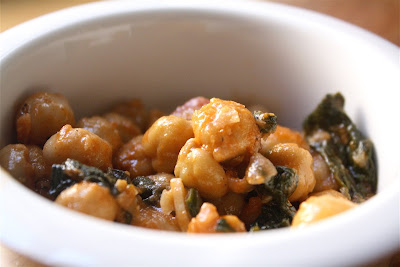 Do you see where I’m going? Routine can be a lovely, comforting thing, certainly if there is peanut butter involved. At least in respect to my morning coffee, I rely on it heavily every day. But when it leads you to contemplate a peanut butter sandwich for dinner on your night off, when you have a full fridge, well then, then it has betrayed you, gravely.

And so it was last night, while I was talking about which peanut varietal would suit twelve grain bread most favorably, I met a demand, a sharp Kenzi, go cook something, cook something now.


Because the people who love us know us best, right? They know that even at the risk of sounding chauvinistic and slandering women everywhere, sometimes the right thing to do is to tell me to just get in the kitchen already. Sternly. I was nearly yelled at. 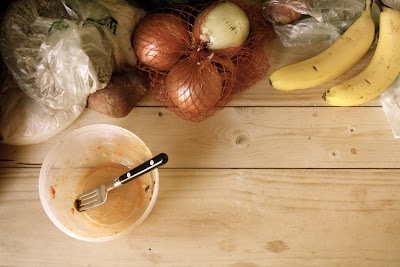 I am very thankful for that. After some vague, mumbling comments about how there was nothing to cook, I found myself soon slinging pots, pans, chickpeas, spinach. I made two lovely olive oil fried eggs. I roasted potatoes, rosemary, Vidalia onions. And I felt so much better.

This surely doesn’t need to be your breakthrough recipe after a stint out of the kitchen, but it was mine. For your sake I hope you’ve been in the kitchen all along. This can just be your next one.

Note: This recipe is very adaptable, which is fun. Feel free to play with the spices, depending on what you have on hand. Use a little less spinach, a little more. It’s up to you.

Place a large saucepan over medium heat and add half the olive oil. When it is hot, add the spinach with a pinch of salt and stir well. Remove when the leaves are tender, drain in a colander and set aside.

Heat remaining olive oil in a frying pan over medium heat. Saute garlic, cumin and red pepper. Cook for 1 minute more or until the garlic is nutty brown. Add the chickpeas, tomato sauce and paste. Stir until the chickpeas have absorbed the flavors and are hot. Season with salt, pepper, and vinegar.

Add the spinach and cook until it is hot. Check for seasoning and serve with paprika on top, with crusty bread. An egg on top is also excellent.
Posted by KenziW at 12:27 PM No comments:

This food is the holy grail of food. It’s almost like the culinary world’s femme fatale, disguised neatly in a power business suit.

But then, then you look down, and there are red, six-inch heels. Bright red. Just the perfect amount of flair to make it no longer just neat and professional and technically executed, but creative, slightly mysterious. And suddenly, the food has the power to make you do strange things, like buy a twenty-six dollar glass of sparkling wine.

Does that make any sense? Probably not. It’s all to say, really that the food at this place is unreal. In the way that makes you try and compare it to high-powered businesswomen with red stilettos - because in reality, there aren’t many other words fit to describe it. In the way that makes you think you may as well stop cooking now, and resign yourself to meals of potato chips and frozen pizza, because once you’ve tasted this, everything else will drastically pale in comparison.

And when they take you back into the kitchen (the kitchen!) for reasons unknown - to see the chefs and make you edible Old Fashioneds (edible old fashioneds!) – the whole experience just gets better, crazier, even harder to describe.

And so the love affair with New York continues.
Posted by KenziW at 12:23 PM 1 comment:

Me and this little site

I suppose this took long enough.

Rue le Sel now has an about / FAQ page.

Just in case anyone reading is not my mother, or father, or brother, or another such close blood relative, you can learn all about me and this little site. You might even learn about things painted on my bathroom wall.

It's over there (Right now I'm pointing to the right side of your browser), listed with the Recipe Index. Check it out.

Have a lovely evening, and talk to you soon.
Posted by KenziW at 6:52 PM 2 comments:

A little of this

So I got this new job. Same field. Only now, instead of research about confit, and Black Prince tomatoes, and saddles of rabbit and what have you, the focus has switched.

Now, it’s all about copper stills, and distillation proofs, and bisongrass versus Russian standard, and things the likes of which I’m not even legally allowed to be well-versed in, since my age is somewhat limiting in that particular, alcoholic field. 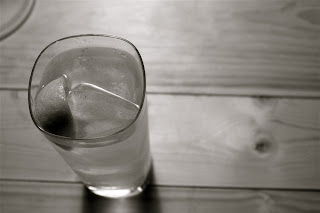 I’ve been feeling slightly inspired by all of this cocktail business, and so tonight, I started juicing my own citrus and pouring it all into my little-used shaker. It was reminiscent of my childhood concoctions, minus the booze: a little of this, a little of that, a lot of ambivalence and mostly no idea what I was doing.

It wasn’t half bad. I’m sure my new boss would have his own opinions; I’ve probably messed infinitely with the balance of spirit to bitter, sweet to rounder. Either way, here it is:


*If I’ve learned anything so far, I think I’m supposed to tell you that a vodka like bisongrass mixes very well with fruit juices, so that would be the best choice here.

Also, I have a feeling this drink would be awesome with a heat component – jalepeno infused something? Chili flakes? I’m still learning.
Posted by KenziW at 5:51 PM 1 comment:

Hi there. I write this.

All manner of delicious things. To the occasional new reader: thank you for stopping by, and glad to meet you.